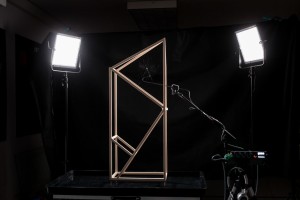 Art work Interweaving Soundscapes is situated at the crossroads between science and art. In terms of art, scientific investigation of organismal vibrational behaviour (biotremology) is interesting as a sonic manifestation of animal activity; this sound mass can however, when specifically organised, also extend into the field of interspecies communication. Is it possible to restore the primordial unity between man and nature by way of sound? While the large part of the sound signals is imperceptible to us without proper equipment, we are nevertheless at every moment of the day immersed in the sound waves of this inaudible world … Spider webs had a special place in this exhibition. The webs of two spiders of the species Araneus diadematus were exhibited. The spiders were present in the exhibition space on a specially designed structure that formed the central part of the installation. The spider web is not only a snare to catch insects but can also be regarded as an extension of the spider’s sensory systems. The vibrations spiders send and receive through the web are inaudible to human ears, but the exhibition reveals this invisible sound world. The composition is formed by raw sounds of insect and spider activity, which are subsequently electronically processed. Most of the recordings were made in the studios of the Cona Institute and Boštjan Perovšek – with two spiders, which were also be present in the exhibition space. A set of custom-made piezo sensors was used for recording. Some of the selected recordings were made with sensors connected to a spider web at the Tomás Saraceno studio, and some recordings are the part of Roland Mühlethaler’s private sound archive. The composition designed for this installation will be performed live.

Authors Boštjan Perovšek and Dr. Roland Mühlethaler about the ideas behind the art work Interweaving Soundscapes: 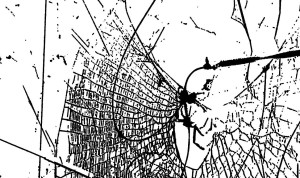 Mühlethaler: “Urban space and its structures are often considered to be non-natural anthropogenic habitats with a low diversity of animals and plants. Even though humans and animals (mainly arthropods, i.e. insects and spiders) have been living together for a long time throughout history, we still know very little about the species we share our houses with. Recent scientific studies have shown that urbanisation does not necessarily have to be destructive to nature, and in fact some animal and plant species may even benefit from human activities. The rich diversity of insects and spiders found in houses reflects a gradient of association with human habitations, from synanthropic arthropods that appear to be strongly adapted to human houses (cobweb spiders, carpet beetles), others that seek shelter and resources only occasionally (ants, ground beetles, hunting spiders) to many groups that simply become trapped in houses to their own disadvantage (attracted by light, odours etc.). Urban habitats are actually much more diverse than supposed. Many animals show plasticity in behaviour, especially the species that live in changing environments and thus adapt to urban life and habitats rather easily. Some of the synanthropic species are often thought of as pests (e.g. bed bugs, certain flies), although there are only a few harmful insects living in our houses. No spider species is regarded as a medical pest: on the contrary, they help humans in controlling pest insects and therefore make nice roommates.”
Perovšek: “On a symbolic level, the spider webs represent the web of human interpersonal communication at all levels. This web, however, is not only a sympathetic aide, it is also the watcher of the centres of power and control. Whether they like it or not, modern individuals leave visible and invisible traces of their behaviour, aspirations and movements in the real as well as the virtual world. These traces are readily collected by the internet. This web can thus be thought of in terms of total control, which the corporations, acting in concert with state governments, try to constitute as a normality throughout the social sphere. An individual has become prey caught in the sticky web of promises, with the threads of control tightening in much the same way as the spider wraps its web around the victim. The silk thread reveals its bivalent power; interwoven in a fabric, it caresses – wrapped around the prey, it subjugates or suffocates.” 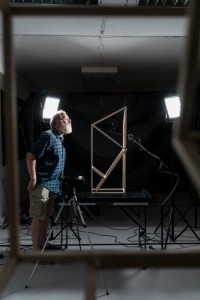